Based on The 50 Principles of Sogetsu by Sofu Teshigahara

My manager at my job encouraged me to sign up for a quarterly lightning talk series at work. The presentation format is pretty casual – just five minutes to discuss whatever you’d like.

I have to admit, the process for developing a topic was pretty difficult! Originally, I wanted to dissect “The Cloud” as a metaphor for the web, and propose new metaphors we could use (inspired by Laurel Schwulst’s My Website is a Shifting House Next to a River of Knowledge) to think about personal websites. Laurel’s essay changed how I think about websites, and in some way is probably indirectly responsible for this blog. I worked on this idea for the talk for probably 20 hours and felt extremely frustrated by the lack of progress.

Two days before the talk, someone asked me why I didn’t just talk about ikebana. That was the first idea I had weeks ago, but it just seemed really cliche. For some reason, hearing it a second time around from another person helped me reframe the idea. Maybe I just needed to spin my wheels for a while?

I immediately thought of Sofu Teshigahara’s The 50 Principles of Sogetsu (which is why I posted them on this blog earlier in the week), and how they were highly relatable to any creative practice. I work at a software company making tools for designers, so it seemed natural to liken the software we build to another creative discipline. 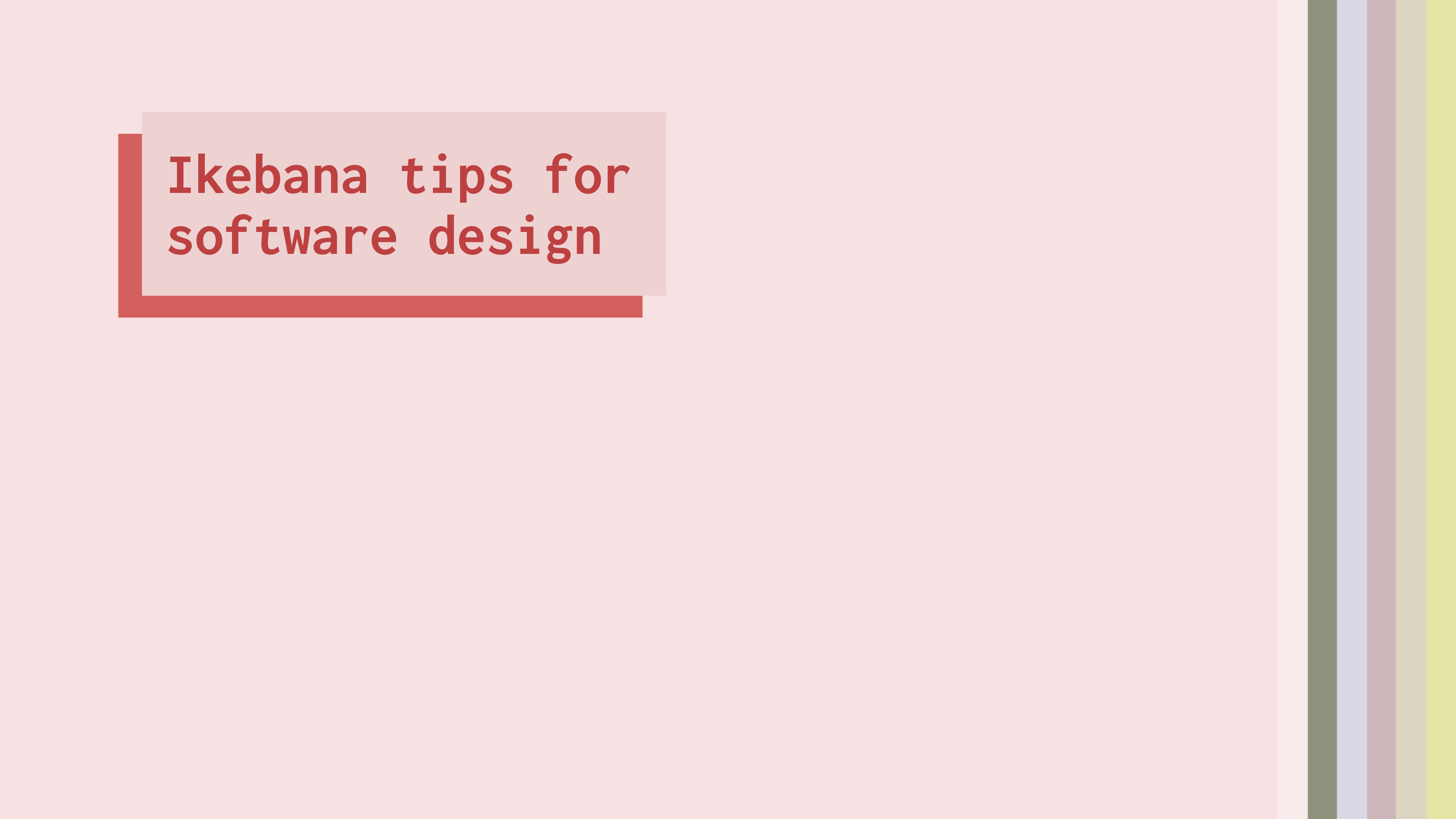 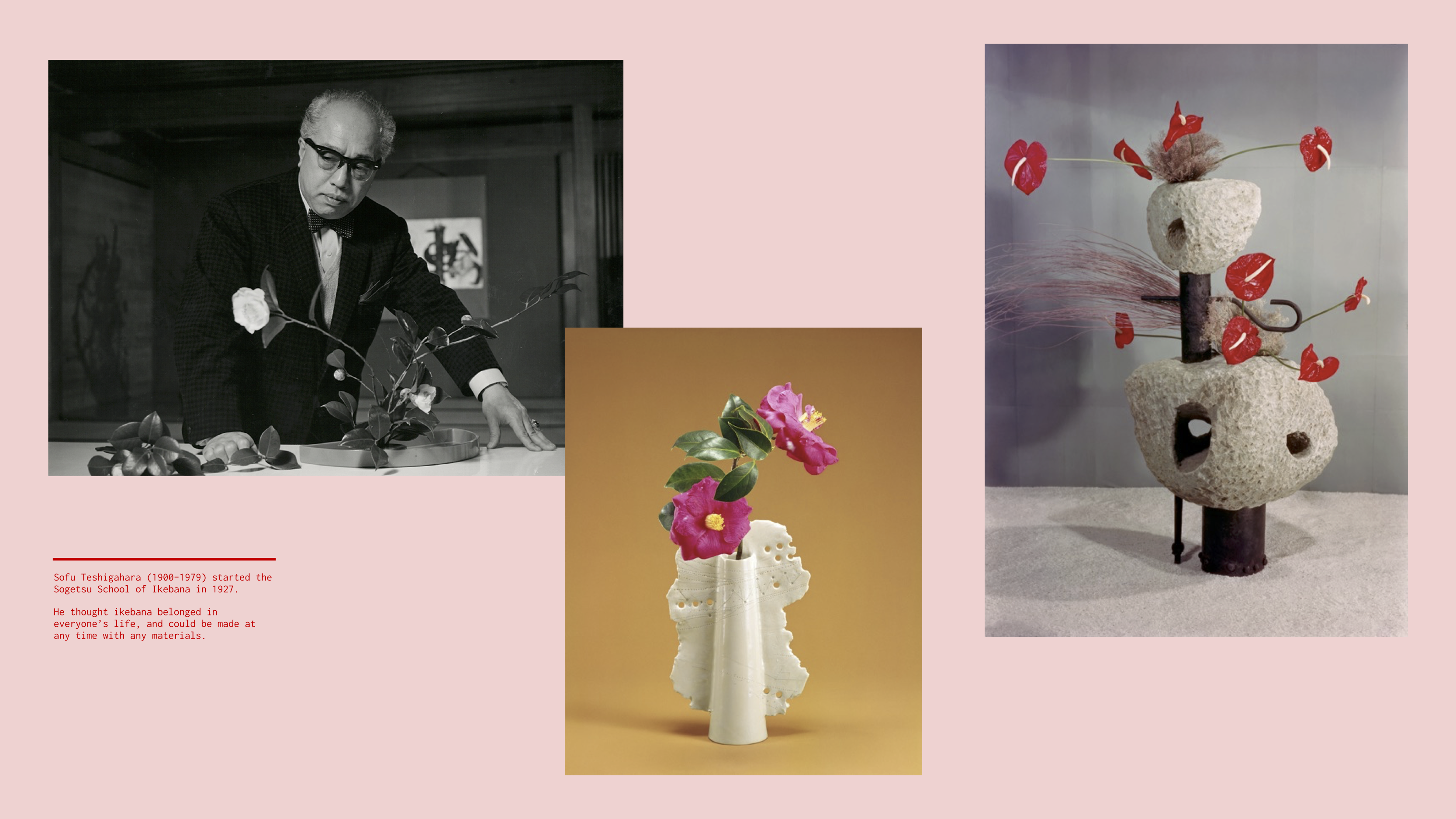 I started studying ikebana at the end of 2017. When I first started, I didn’t realize there were different schools of thought (which seems really naive in hindsight). Unknowingly, I started taking classes in the Sogetsu school of Ikebana, started by Sofu Teshigahara in 1927. Sofu Teshigahara came from an ikebana family, so he was well-versed in the traditional school of thought around ikebana. Unusually, he also had prolific calligraphy and sculpture practices. His artistic breadth influenced his outlook on ikebana, and led to the creation of the Sogetsu school. 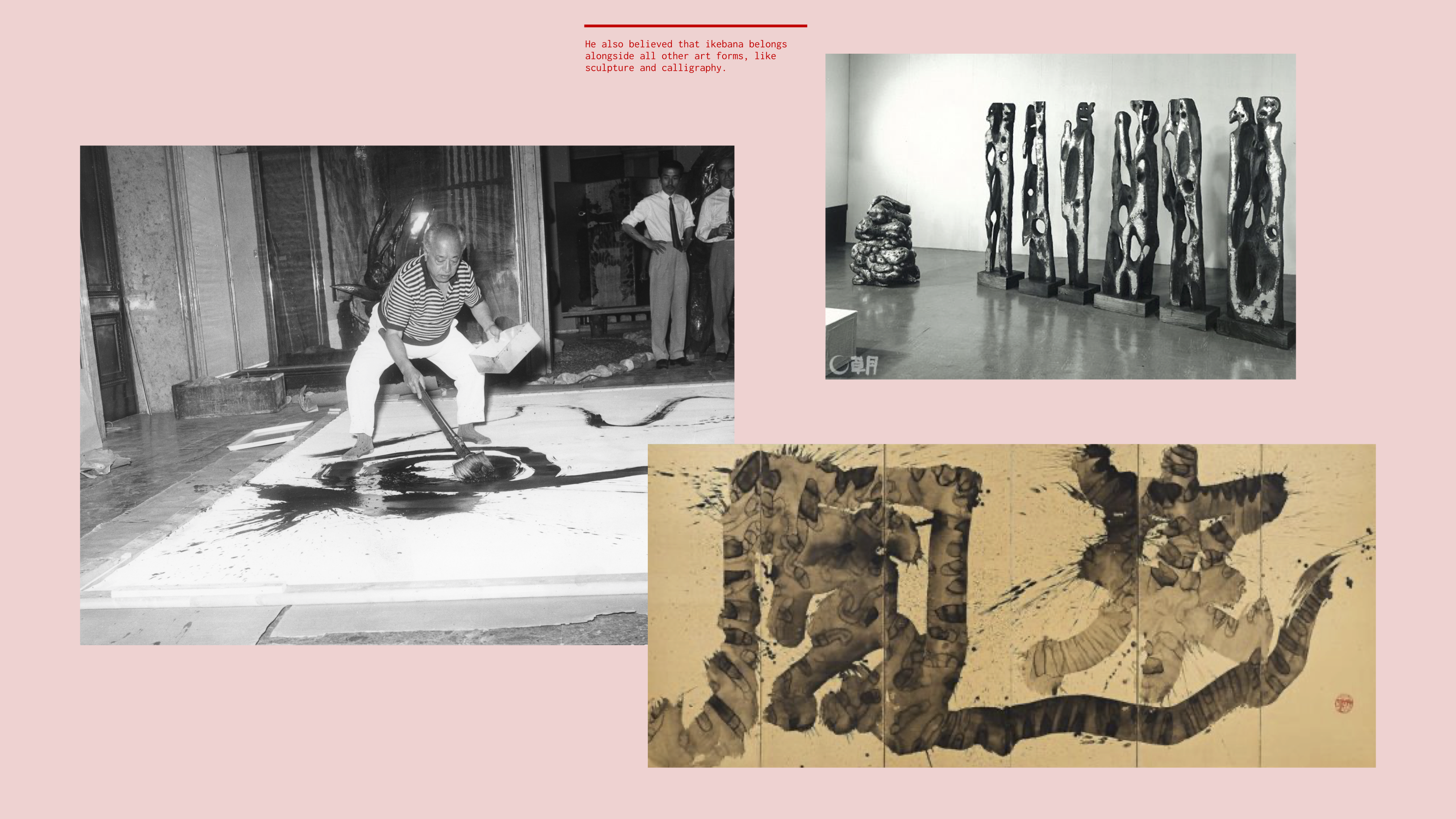 In short, Sogetsu is a more avant garde style of ikebana. Sofu Teshigahara had two kind of radical ideas about the role of ikebana in society: 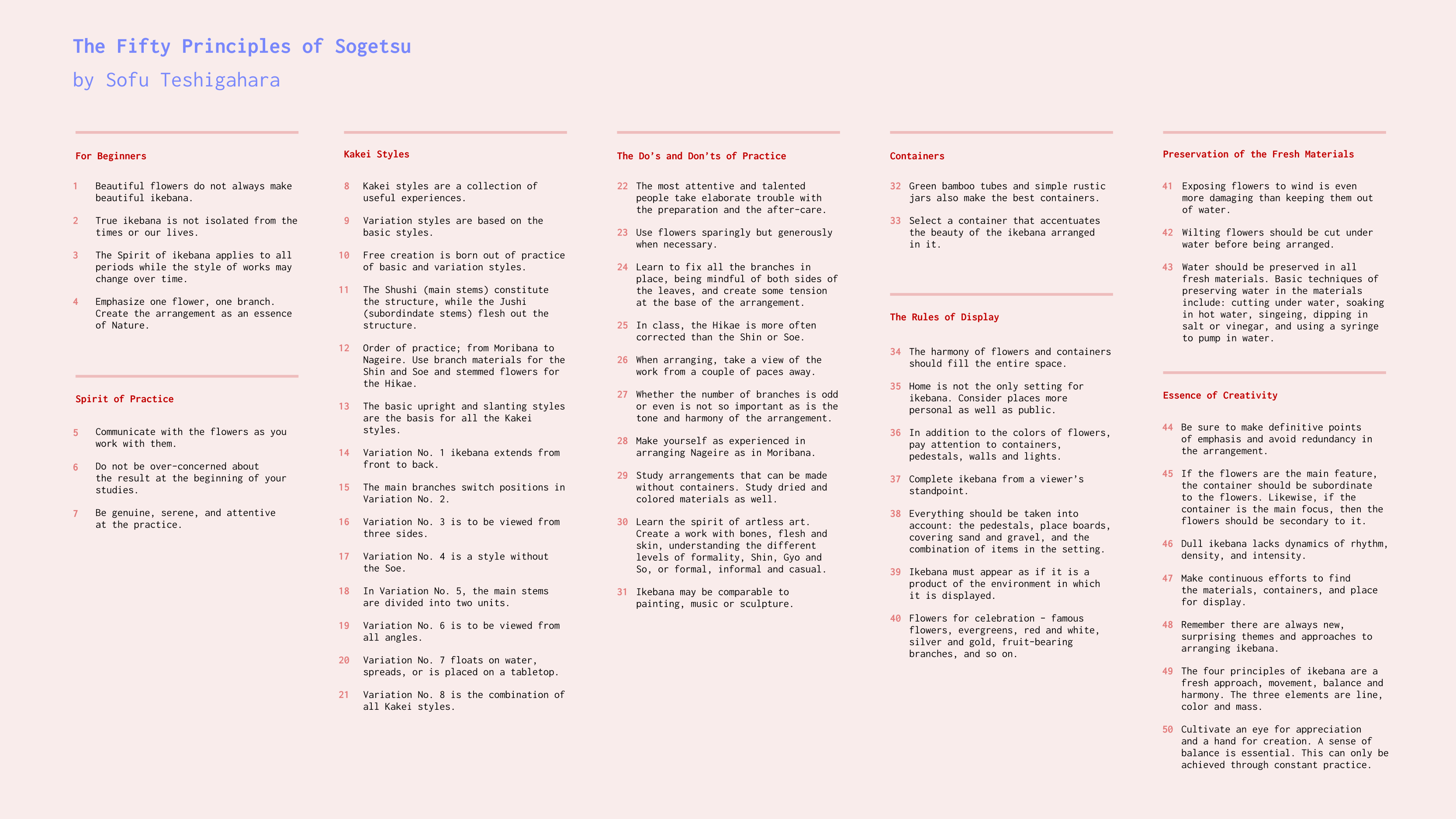 So, what do you do if you’re a loner with a new radical idea? You write a manifesto.

Sofu Teshigahara wrote The 50 Principles of Sogetsu to lay out the philosophy, as well as practical tips for arranging flowers (I was unable to find the year this was published, but I assume around 1927, when Sogetsu became a thing).

I found that these principles apply to several different creative disciplines, much in the spirit of his own views on ikebana.

I picked the most relevant ones for my workplace, making slight adjustments for my startup audience! 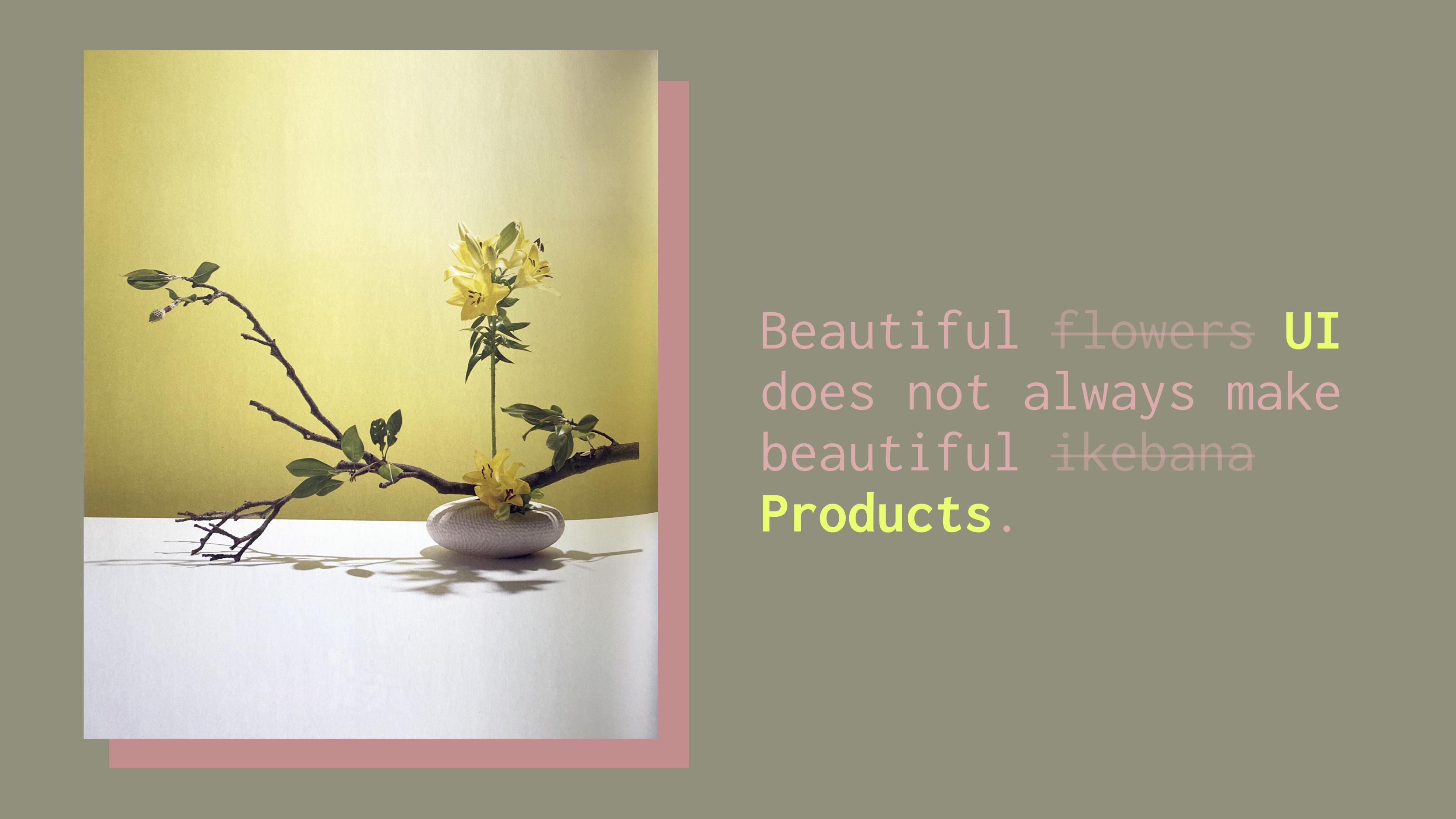 Individual UI elements may be attractive, visually consistent and well considered… but that’s not enough to create a compelling or successful product. Thinking of software as a bunch of individual components coming together compromises the holistic product vision. 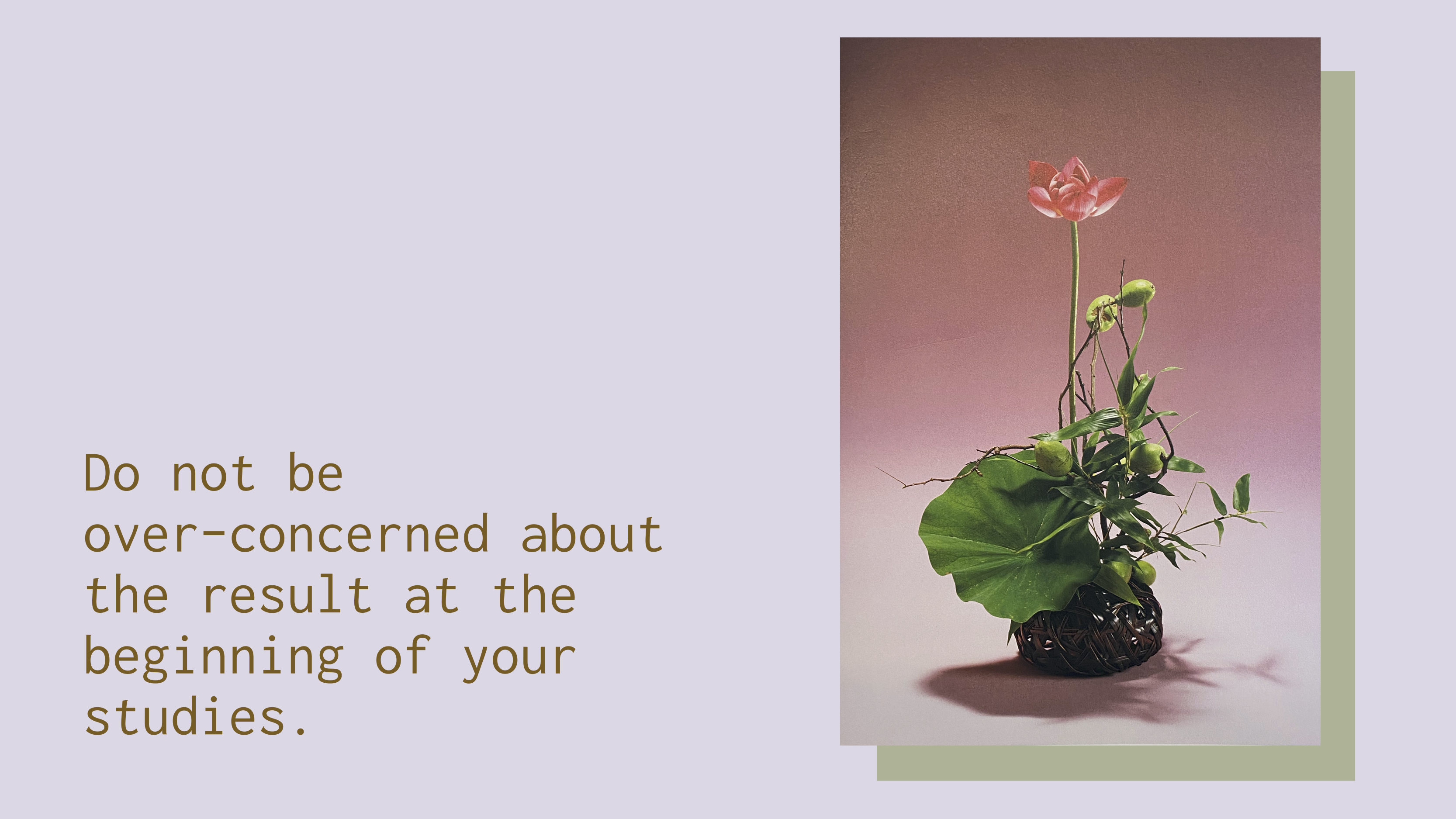 Do not be over-concerned about the result at the beginning of your studies.

Sofu did a good job with this one! No changes here. 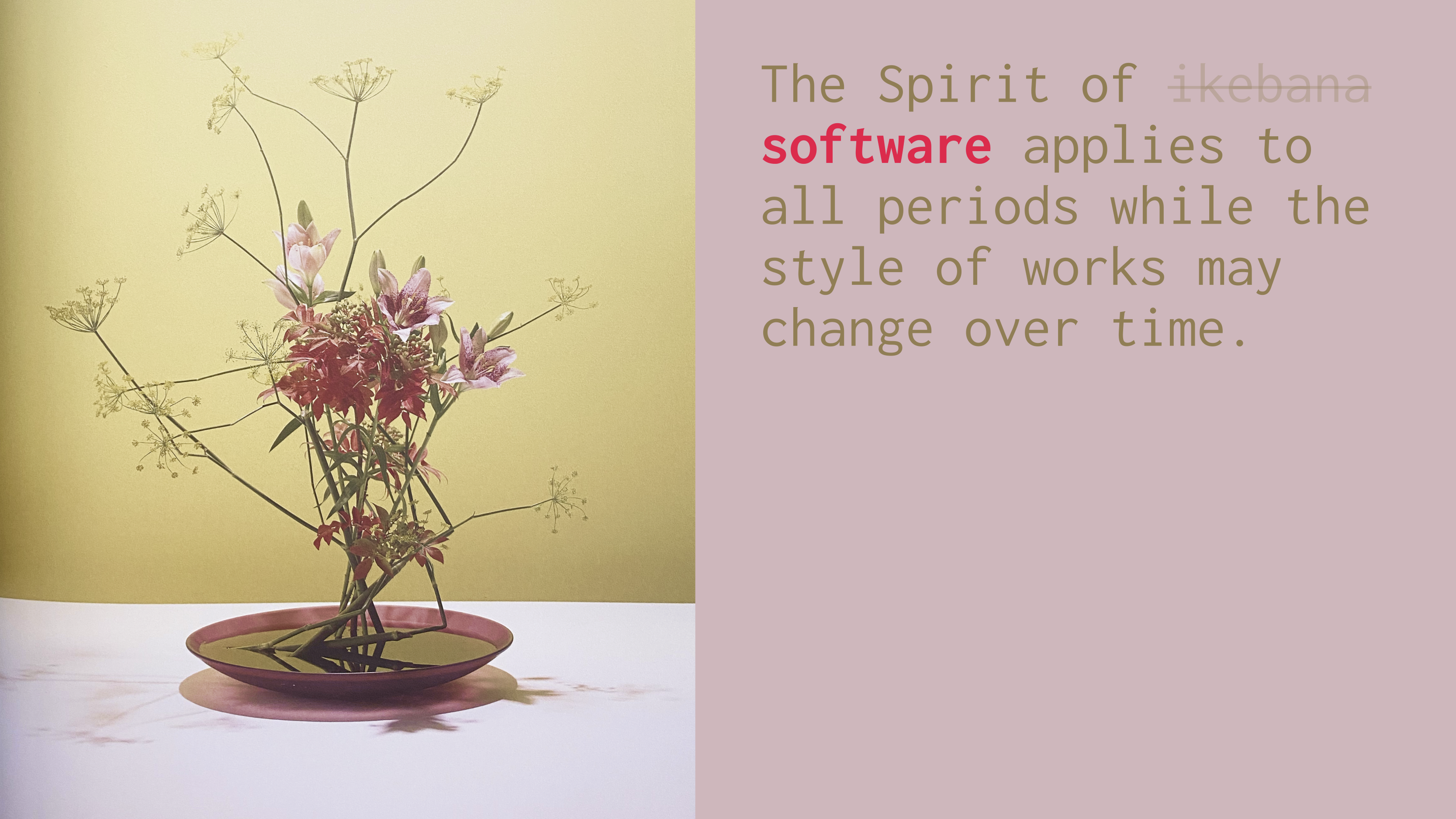 The Spirit of software applies to all periods while the style of works may change over time.

Software is a much newer medium than ikebana, but sometimes it’s shocking to see how little things have changed since the invention of the GUI. We still use the same desktop metaphors for our computers, and smart phones are largely unchanged since the first iPhone launched in 2007. 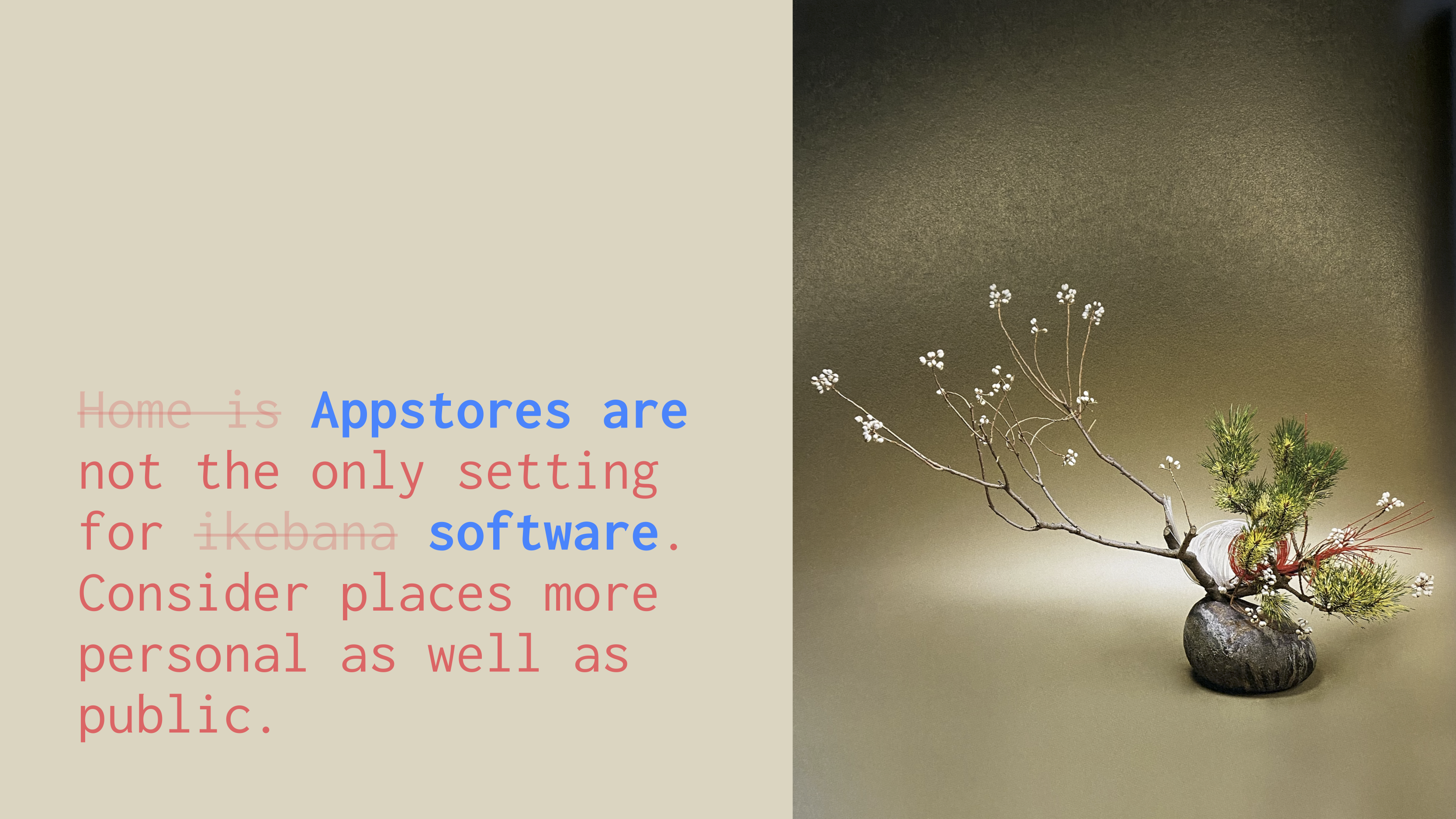 Appstores are not the only setting for software. Consider places more personal as well as public.

Ikebana is usually framed as a very domestic practice. Bringing it out to the public (or maybe even in more personal spaces, like a bedroom) expands the idea of what ikebana could be.

Similarly, software products are usually distributed through an app store, in hopes of gaining the largest number of users possible. There are alternative distribution methods for software, like web based apps. These are getting more and more popular (think Facebook, Figma, Notion, etc), as they require less development effort to be cross-platform.

However, I think there are more exciting possibilities around software meant for a private audience (like Robin Sloan’s great blog post, An app can be a home-cooked meal, or Clay Shirky’s Situated Software).

What if you build an app for one person to use one time? Or maybe for more people to use, but it has an expiration date? Can an app be an inside joke? 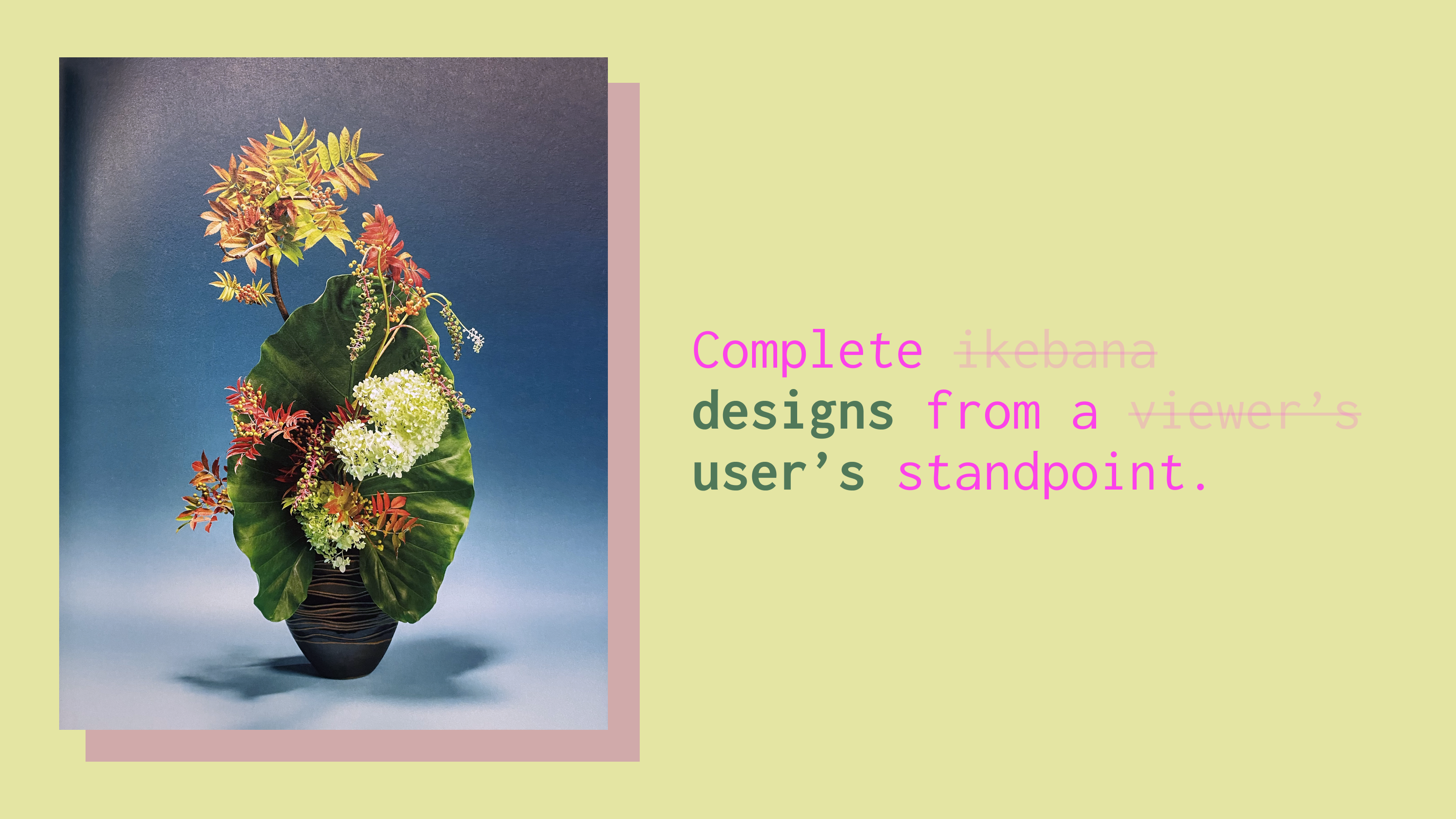 Complete designs from a user’s standpoint. 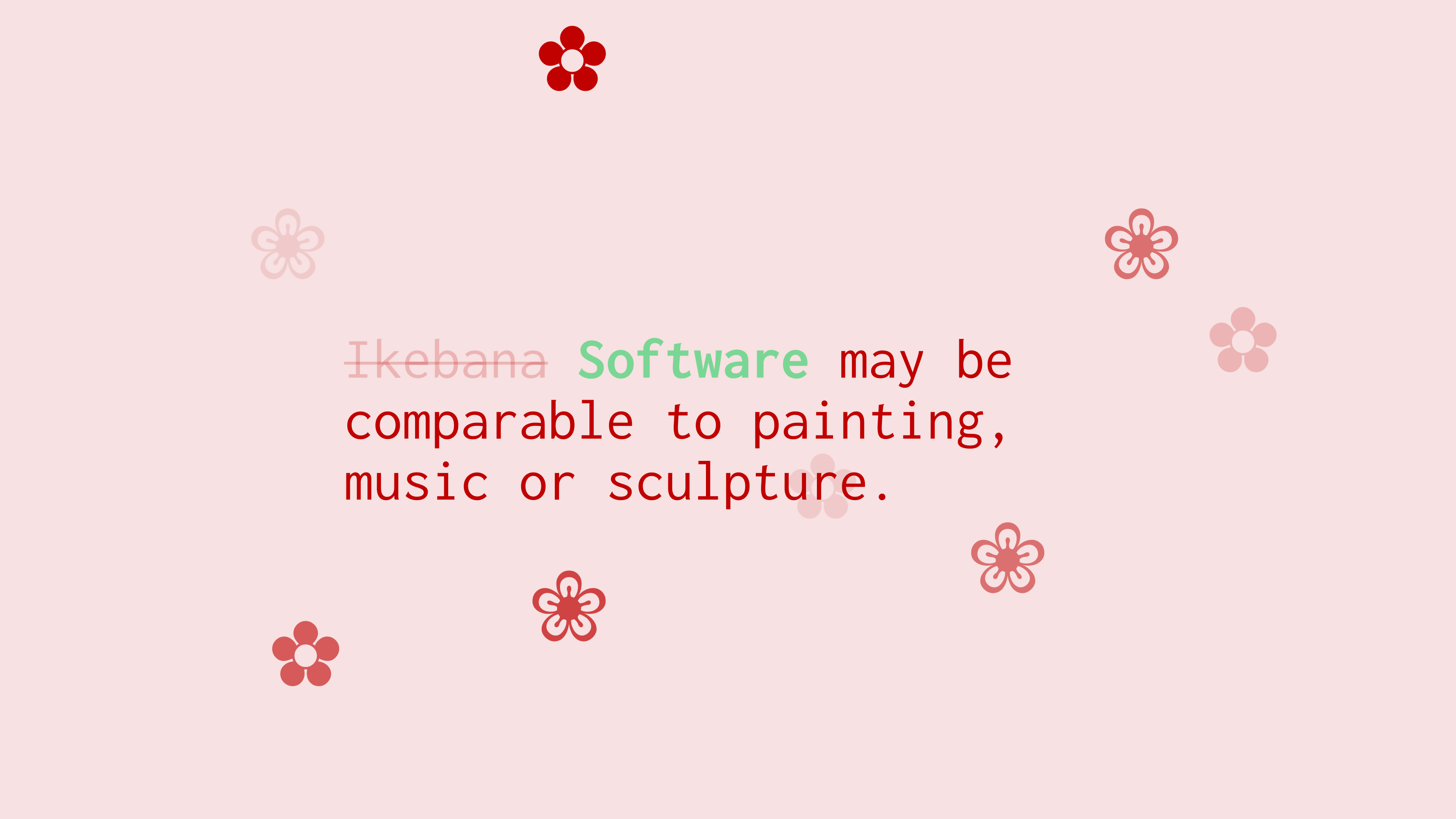 Software may be comparable to painting, music or sculpture.

I thought it was important to end on this note. Software is a medium like any other. It can be a means to an end, or a way to engage creatively with any idea.

I scanned in images from arrangements from Sogetsu Quarterly Magazine. As mentioned before, the words were taken from Sofu Teshigahara’s The 50 Principles of Sogetsu.

This was an interesting exercise! I signed up for a talk having zero idea what I’d discuss. Coming up with an idea, and honing it down into a five minute, digestible format for a large audience was a stressful but fulfilling challenge. I hope I can continue this in the future!